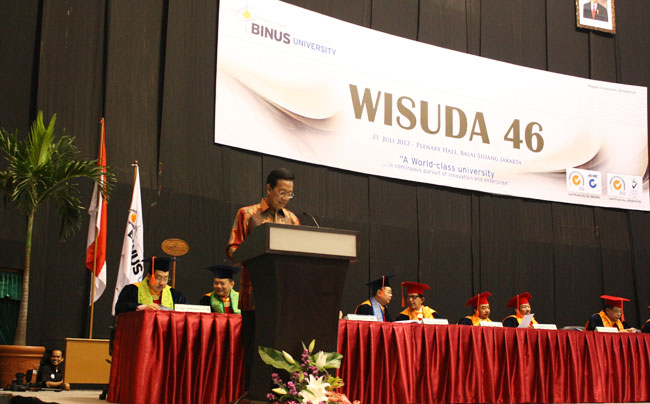 There was something on the 46th Graduation Ceremony of BINUS UNIVERSITY held at Plenary Hall, Jakarta Convention Center, Saturday (21/7). Yogyakarta Governor, Sri Sultan Hamengku Buwono X, was present among the guests to congratulate the alumni.

In his formal speech, Sri Sultan said that knowledge is one of the most important strength in the 21st century. Therefore, the character building and process will never be easy because it is related to the process to have high-quality people.

“That is where education should lead to. To build people who have the intelligence, good morale, and character,” Sultan said.

Binus has a vision to be an internationally acclaimed university which develops a continuous innovation to support their alumni in entering world-class companies. To achieve that goal, Sultan said, BINUS should be able to establish several basic values.

“Some of them are perseverance, the freedom to innovate with the combination of integrity and creativity, and a broad vision in education by utilizing the opportunities in the future,” he said.