Located at the university’s Anggrek Campus, the centre will support BINUS University’s aim to be the premier R&D hub for Al in Indonesia. Leveraging the power of NVIDIA’s GPUs, it will be a showcase of the commercial potential of GPU-accelerated deep learning applications. 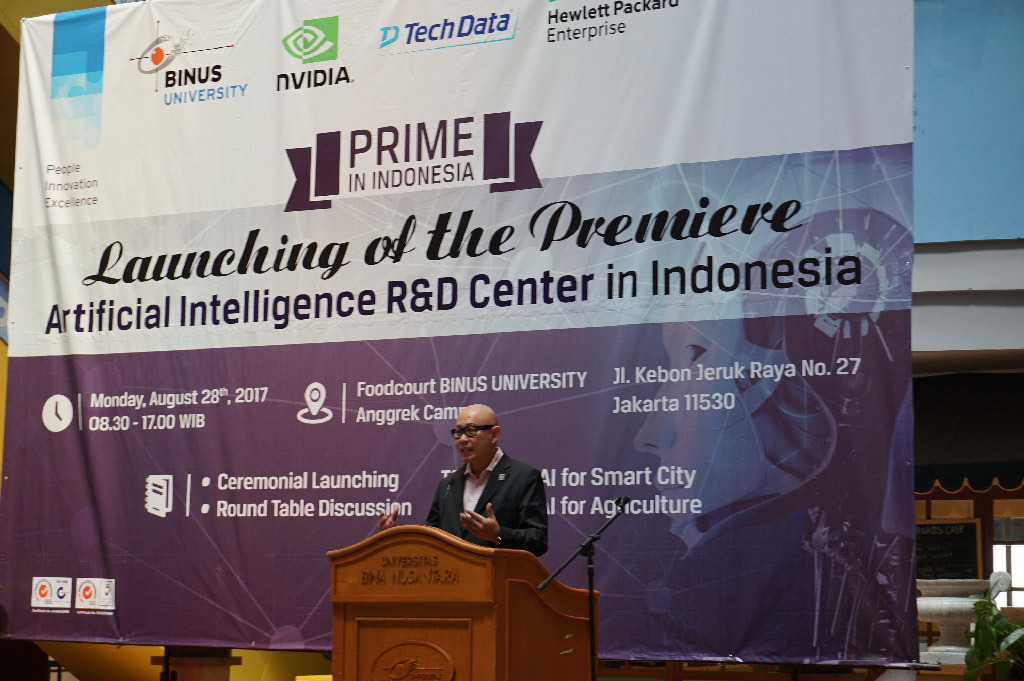 The launch event was held in BINUS University in Jakarta with speeches by Prof Dr Ir Harjanto Prabowo, MM, rector of BINUS UNIVERSITY; Ir Bernard Gunawan, CEO of BINA Nusantara; Raymond Teh, vice president of sales and marketing for the Asia Pacific region at NVIDIA; and Joseph Lee, vice president of APAC at Kinetica.

“Today, we stand at the beginning of the AI computing era, ignited by a new computing model, GPU deep learning. This new model — where deep neural networks are trained to recognise patterns from massive amounts of data — has proven to be ‘unreasonably’ effective at solving some of the most complex problems in computer science. In this era, software writes itself and machines learn. Soon, hundreds of billions of devices will be infused with intelligence. AI will revolutionise every industry. NVIDIA provides the products and solutions to power this revolution,” said Teh.

“The world’s top researchers are pushing the boundaries of AI and doing amazing things to impact the world to make everybody’s life better. We advance fundamental research and foster partnerships with universities, such as this collaboration up with BINUS University to set up the lab to keep AI pioneers ahead of the curve with support for students, assistance from our researchers and engineers, and access to the industry’s most advanced GPU computing power,” he added.

“This research centre is a tangible form of the BINA Nusantara vision to foster and empower the society in building and serving the nation. At BINUS University, we consider collaboration between higher education institutions and industries imperative in reaching this objective, as well as our BINUS 20/20 vision of being ‘a world-class university… in continuous pursuit of innovation and enterprise’,” said Gunawan.

Kinetica is providing the accelerated database that runs on the GPU servers at the centre, which is located at the university’s Anggrek Campus. “Kinetica is proud to support BINUS University to deliver the first AI R&D centre in Indonesia. Kinetica’s GPU-accelerated database is purpose built for supporting the advancements of machine learning and AI. GlaxoSmithKline, for example, is using Kinetica to help transform the way data is used as a strategic asset within its R&D organisation,” said Lee.

“Mastering the knowledge and advanced technology in the field of IT is one of the provisions in having a successful career in multinational companies or becoming an entrepreneur. Through the centre, we will try to educate, enrich and empower society,” stated by Dr Bens Pardamean, director of the university’s Bioinformatics & Data Science Research Centre, who spearheaded the effort in establishing the centre.