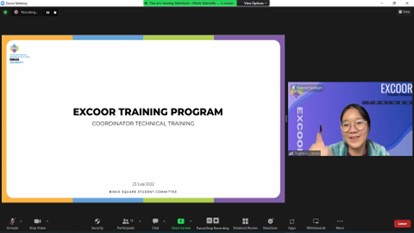 EXCOOR Training Program is a program held by Internal Affairs Division of BSSC 12th Presidency which assists and directs each staff of BSSC to know more about how to prepare and run an event in the future according to their respective job descriptions. EXCOOR Training Program itself is divided into 2 days which was held from 22nd to 23rd June 2022. The material in each days is different, such as EXCOM Technical Training and EXCOOR Technical Training. The purposes itself is to train the EXCOM and EXCOOR who are going to make an event in the future. 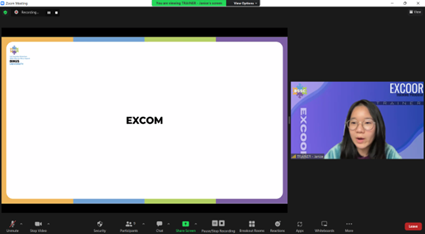 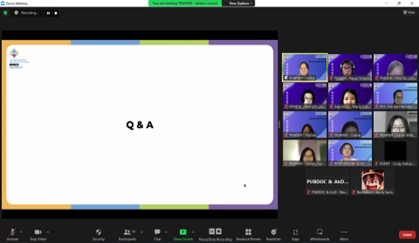 The second day of EXCOOR Training Program batch 2 was discussed about EXCOOR Technical Training. In this session, participants learned about the overview of  things that must be considered by an EXCOOR, such as things that have to be prepared before the event, during the event, and after the event. The middle of the session, the trainers were divided into three breakout rooms to explained specifically about the responsibilities and job descriptions of each division that consist of Event and SPK division, Art and Decoration with Publication and Documentation division, Consumption and Registration with Partnership division. Each breakout room was trained by a different trainer, where Event and SPK Division room was lead by the Chairman of BSSC 12th Presidency, Janice Olivia Limawan, Art and Decoration with Publication and Documentation division were lead by Vice Chairman of Operations, Rachel Esmeraldaa Yoswandi and Vice Chairman of Finance, Karen Wilbert, Consumption and Registration with Partnership division were lead by Vice Chairman of Event Management and Marketing, Celine Kwok and Vice Chairman of Legal and Human Resources, Christy Aurelia Lie. After the training has ended, the participants have to collect the Insight Enrichment where they need to know the experience of the before presidency EXCOM and EXCOOR’s experience to improve their knowledge on how to prepare and hold an event.